Northeasterners give holiday gifts and tips more often than Americans in other parts of the country, a new Consumer Reports survey finds.

In the nationally representative survey of 2,000 adults, 69 percent of Americans from the Northeast said they tipped with money or a gift—or both—during the last holiday season. That compares with about 60 percent from the Midwest, South, and West.

The figures reflect the responses of more than 1,700 Americans who regularly used a service provider during 2017 and told us they gave some form of tip or gift last holiday season. The service providers they tipped were more likely to receive cash; the exception was teachers and school bus drivers, who more often received gifts.

Four in 10 Americans who used a service provider said they didn’t tip at all.

The top three reasons respondents gave for not tipping: because it wasn’t customary to tip the service provider; they didn’t use a person’s services regularly enough to tip them; or because they only tipped people who provided exceptional service. 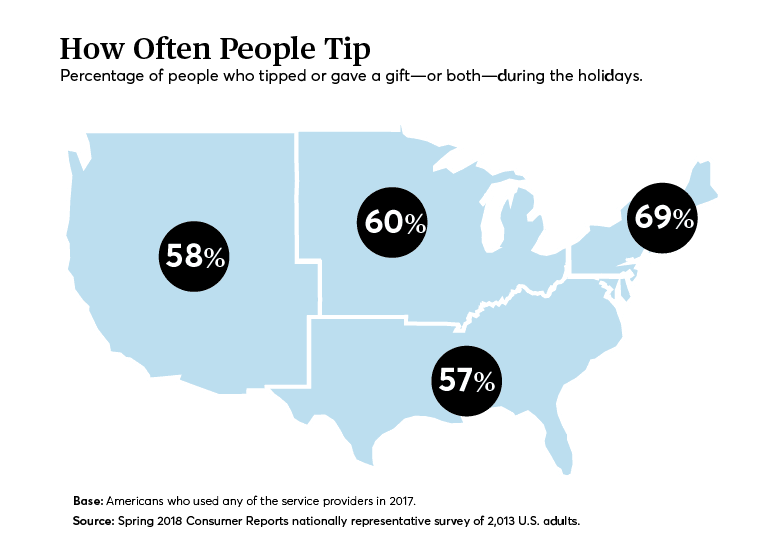 There also were stark contrasts in tipping among the generations.

Generation X, the so-called Slacker Generation— roughly between ages 37 and 53—was the most generous. Sixty-four percent gave some form of tip, compared with 60 percent of Baby Boomers and 61 percent of Millennials.

Gen Xers were tied with Baby Boomers for giving the most; each gave a median tip of $50 over the holiday season, compared with $40 for Millennials.

The so-called Silent Generation, or Silents—the generation older than the Boomers—were the least likely to give holiday tips, and the least generous. Fifty-three percent gave a tip or gift; the median value was $30. 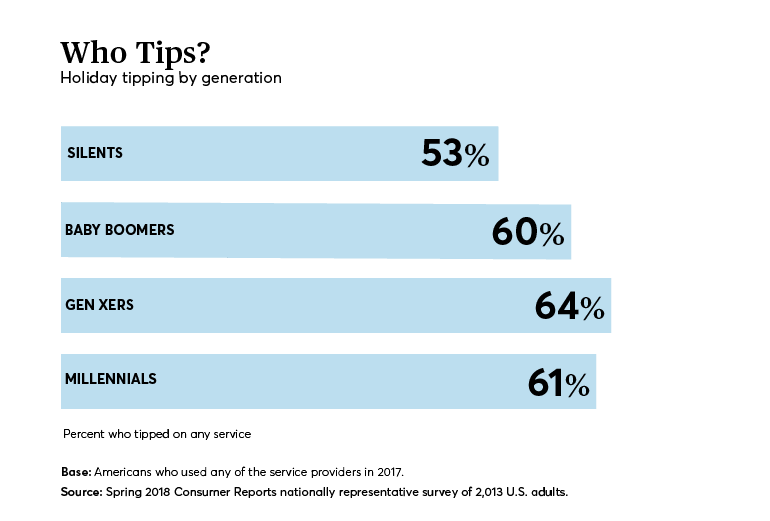 What Accounts for the Differences?

Thomas P. Farley, a New York–based etiquette expert also known as Mister Manners, says he’s not surprised with the finding that Northeasterners gave more often. City dwellers in many Northeast cities rely on services like parking garage attendants, doormen, and taxi drivers that residents of the suburbs and exurbs don’t require, he noted.

“As a Manhattanite, I call it the $20 exit fee,” he says. “That’s the $20 that seems to evaporate from your wallet any time you leave your apartment.”

“So it comes as no surprise that urbanites in the Northeast break out their billfolds at the end of the year to express their thanks with cash,” he adds.

But the finding that Midwesterners typically gave lower tips than in other parts of the country doesn’t suggest they’re uncharitable, says Nancy Schnoebelen Imbs, a St. Louis–based etiquette expert and president of Polished, a professional development consulting company. “The difference is relative to the cost of living,” she suggests.

“St. Louis is a very cosmopolitan area,” Imbs continues. “A large part of the community recognize that, say, the waste management people work hard, so they put out an envelope for them. Or they might drop off some brownies at the fire department. If someone goes to the same hair salon every month, they’ll give an extra bonus tip at year-end. There is a knowledge, an awareness. The Midwest is, in general, a very giving region.”

“We all do gift cards and a thank-you letter, or a bottle of wine and a thank-you note,” she says of her and her friends’ holiday tipping habits. “For teacher gifts, people do a Target gift card or a Starbucks gift card. It’s all about showing appreciation.”

But the finding that Gen-Xers tip more often than other generations was unexpected to Farley. As as a Gen-Xer himself, he teaches workshops in bridging generation gaps. “It’s interesting that they’re so generous, given that many of them are in midlife and still saddled with college loans,” he notes.